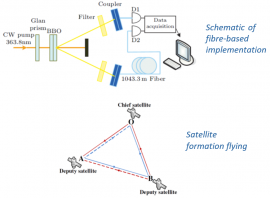 Quantum metrology techniques show great potential to enhance both precision and security of existing PNT techniques. It has been shown that, by probing physical quantities using quantum states of light and/or matter, one can achieve a precision beyond the theoretical limit set by classical mechanics. This effect has been demonstrated in a variety of contexts and is particularly useful in optical metrology applications .

Quantum states of light can be used to enhance the precision of both interferometric and time-of-flight based ranging techniques. For example, so-called ‘squeezed states’ of light allow the noise of a coherent state of light to be suppressed along a certain quadrature, enabling more precise measurements. This technology has found largescale engineering applications (for example, squeezed states have been used to enhance the precision of the long-baseline interferometer of the LIGO gravitational wave detector). Furthermore, numerous protocols exist to carry out precise ranging and/or clock synchronisation by utilising the timing correlations between pairs of entangled photons. Such protocols have been demonstrated over optical fibres, and have achieved an improvement of around an order of magnitude compared to classical time-of-flight protocols. Squeezed states of optical frequency combs have also been used to achieve time transfer with a precision beyond classical limits. There are a number of proposals to use such systems for GNSS orbit determination applications.

Quantum metrology techniques also show a variety of security benefits relative to classical techniques. Entanglement-based ranging techniques have been demonstrated to be more robust to jamming than their classical counterparts. Furthermore, protocols have been demonstrated which, through the exchange of quantum signals, prevent spoofing of ranging protocols by the interception and resending of photons. A quantum clock synchronisation protocol has also been proposed, which is secure to both passive and active photon delay attacks.

While many of the aforementioned positioning/timing quantum metrology techniques have been demonstrated in lab conditions or over optical fibres, this technology has yet to be demonstrated over large distances in free space.

The main objective of the proposed activity is to develop a free space quantum metrology system for PNT, which is robust and miniaturised enough to be deployed in a mobile context or in space.

- design and implement a free-space ranging and/or clock synchronisation system based on quantum metrology techniques;

- work on miniaturising the system and making it robust enough to deploy in space-ground applications.

The main results of the activities will provide:

- detailed characterisation of the precision of the system and analysis of noise sources;

- security analysis of the system, as regards eavesdropping, jamming and spoofing;

- a roadmap for implementing the system in PNT applications, including deployment in space.