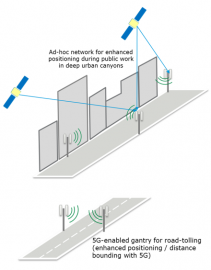 GNSS has become the corner stone of worldwide positioning applications, and in particular for those requiring high-accuracy. The outstanding performances in open sky and very competitive performances in degraded environments of GNSS are widely acknowledged, but also the need to complement GNSS by other technologies to address specific needs in challenging environments.

In this context, 5G appears to be among the most suitable candidates to complement the GNSS & IMU technology-mix currently representing the state-of-the-art for robust and high-accuracy applications. 5G technologies could provide high performance TDoA measurements under specific assumptions, which include very good synchronisation among nodes (e.g. 5G nodes disciplined to GNSS), and Line-ofSight conditions between the node and the user equipment (UE). The latter assumptions may be considered reasonable within dense, local positioning infrastructures, also known in the 5G landscape as enhanced positioning service area. For this, 5G also features interesting capabilities to support a cost-efficient deployment of local networks or private networks dedicated to positioning (e.g. local overlay, either static or mobile, in which it is supported by nodes on vehicles or on UAVs). For instance, with 5G, a Mobile Network Operator or smart city could invest in local infrastructures to enhance GNSS in addressing specific needs where and when needed by customers, for instance:

- enhanced coverage in terms of robustness, accuracy or availability, in e.g. smart cities aiming at enhanced service in some places with high commercial potential, temporary coverage of special events, or during public work in deep urban canyons to enhance machine control capabilities;

- enhanced secure positioning/waypointing or bootstrapping of the UE, thanks to distance bounding and secure time transfer over 5G, e.g. along a road, where the overlay would act as a gantry to control GNSS-enabled positioning.

In addition, with the potential advent of the so-called 5G non-terrestrial networks (e.g. UAVs, HAPS, LEO satellites), one could also envisage to use such 5G signals in a wide area or even a global coverage scenario. This landscape carries multiple opportunities to foster the use of GNSS as a key enabler to 5G positioning capabilities, for which a proof-of-concept is required, this could be done using an MIMO SDR as a starting point.

The proposed activity has as its main objective a proof of concept of a hybrid positioning system using GNSS with 5G TDoA/angular measurements in ad-hoc overlay, aiming to enhance local GNSS capabilities. This will include several first-ofa-kind technical achievements, e.g: