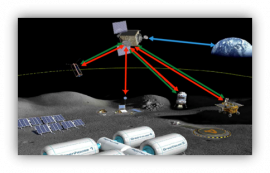 Moon exploration is emerging as the next global strategic priority in space exploration. Several dozens of commercial and institutional missions to the Moon are planned for the coming decades, with a major contribution also expected from ESA (e.g. Orion service module, ESA participation in Gateway lunar station and contribution to multiple lunar robotic missions). In spite of the wide variety of missions planned for the Moon, a lunar navigation (and communication) infrastructure is not yet available.

In light of this, and in close coordination with the HRE Directorate, the Executive has defined a reference Roadmap for Lunar PNT service provision (ref. ESA/PB-NAV(2020)9), consisting of three phases:

This vision is also shared with NASA, closely cooperating with ESA in this field.

In line with this roadmap and preliminary system studies being carried out in NAVISP-El1-023, a Lunar Communications and Navigation Services (LCNS) Phase A/B1 system study has then been agreed to be launched as a joint initiative by the Telecommunications and Integrated Applications (TIA), Human and Robotic Exploration (HRE), and the Navigation (NAV) Directorates. The NAV Directorate is in charge of supporting all the PNT related aspects of this study.
In complement to the LCNS Phase A/B1 study, as explained in ESA/PB-NAV(2020)9, there is technical consensus on the importance to implement a pre-development of the most critical associated navigation technologies.

The activity aims at developing an Elegant BreadBoard, including all functionalities of the future flight payload models identified as critical. This EBB should provide a good indication/reference of the achievable performance for this payload and of the associated mass/power/thermal/size/environmental and interface requirements, as well as confirming the compliance against the LCNS system concept and system performance allocated to the navigation payload. This activity will also define the specifications for the navigation antenna. These are of high interest in order to support the planned LCNS System studies and as a risk mitigation for the implementation of the future lunar orbiting satellites.

The objective of the activity is to: