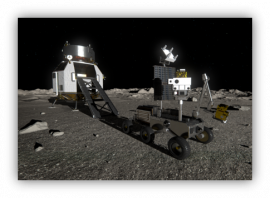 In line with Phase 3 of the reference Roadmap for Lunar PNT service provision (ESA/PB-NAV(2020)9) and in complement to the development of a LCNS navigation payload Elegant Breadboard proposed above as activity NAVISP-El1-061, there is technical consensus on the importance to implement pre-developments of the most critical associated PNT technologies.

The objectives of the activity are to:

The main results of study will provide: