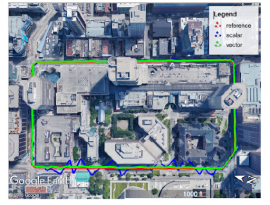 In conventional GNSS receivers (Scalar Tracking Loop – STL), tracking is performed in several independent tracking loops that provide measurements (pseudoranges, pseudorange rates, carrier doppler) to a navigation algorithm (e.g. kalman filter) in charge of the PVT solution.
In Vector Tracking Loops (VTL), the two tasks of signal tracking and PVT estimations are combined. This allows the exploitation of the inherent coupling between the dynamics in each channel and the dynamics of the receiver. In the vector architecture the navigation filter estimator closes the signal tracking loops by generating corrections for the code and carrier numerically controlled oscillators (NCO).

Past studies of VTL  architecture in urban environment have confirmed the benefits of VTL compared to conventional receivers (Scalar Tracking Loops) to maintain tracking in urban environment in static and dynamic scenarios including attenuation, momentary satellite outage or jamming. However, there are also shortcomings, i.e. the sensitivity of the architecture to satellite failures or degraded conditions on a channel: one faulty channel will contaminate the whole solution and may lead to receiver instability or loss of all satellites.

In order to take benefits of VTL architecture for integrity application like autonomous vehicle, overall robustness of the architecture needs to be improved along two main axes:
- Deep Coupling with inertial sensors and other sensors (accelerometers, odometer, …)
'Deep' coupling, as opposed to 'loose' and 'tight' coupling, implement feedbacks from inertial sensors into GNSS signal tracking directly. The objective is to provide very high robustness against noise-like interference in the tracking loops of the receivers and coasting through GNSS outages in urban canyons or under canopy.
- Robustness of the VTL architecture
Several individual aspects have been studied but never consolidated in a single integrated VTL architecture. It is therefore proposed to study several type of additional detectors and integrity monitoring functions to be integrated in a VTL architecture:
- Adaptation of RAIM concept to VTL architecture
- Detectors based on correlator or discriminator outputs
- Adaptive VTL architecture including fault detection (Multipath, Non-Line-Of-Sight [NLOS])
- Multipath and NLOS detection and mitigation
- Detection and isolation of channels contaminated by interferences

The objective of the proposed activity is to design and demonstrate in urban areas  a Software Defined Receiver proof-of-concept, implementing a Deeply Coupled Vector Tracking Loop architecture including:

- Review of State-of-the-art for the most suitable strategy for inertial coupling with the different possible VTL architecture
- Selection of the architecture and identification of the threats needing specific detectors
- Design of the inertial coupling system
- Design of VTL-Detectors  and VTL-RAIM functions
- Implementation and integration in a Software Defined Receiver
- Experimentations to demonstrate the achieved protection levels and robustness in real and simulated environment
- Conclusions on the feasibility, benefits and drawbacks of the proposed architecture. Identification of future work to improve the solution (modelled errors, additional detectors)

The main outputs of the activity will consist of a proof-of-concept of a robust VTL architecture demonstrated in laboratory and in real environment (urban canyons).
This proof-of-concept,  focused on autonomous vehicle in urban area, can then be reused as a starting point of next studies in other application domain.