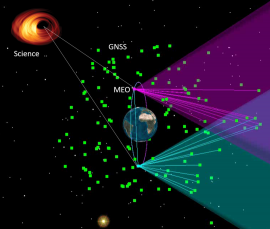 Precise relative positioning in MEO (Medium Earth Orbit, at altitudes ranging between 2,000 and 36,000 km) exploiting GNSS is a subject that has been little explored while having high potential for enabling an interesting set of applications based on space-to-space interferometry.
Establishing accurate inter-satellite baselines based on GNSS measurements would open the door to new missions at affordable complexity and cost in the areas of Science, Lunar Exploration and Earth Observation. Examples are the imaging of the event horizon of the supermassive black hole in the centre of our galaxy, the positioning of spacecraft in Lunar orbits or aperture synthesis for Earth atmospheric sounding.
Reaching a baseline accuracy of 0.1 mm as required for some of those applications is not easy when using GNSS signals. The advantage of MEO is that atmospheric drag is negligible and orbital mechanics might be simpler than in LEO, even if the number of GNSS satellites in common visibility of a pair of MEO receivers is in general low, and the angle of arrival of signals upon each receiver is quite different, so that common errors do not cancel as well as they do for small baselines on ground.
The main objective of the activity is to address the relative positioning between a pair of satellites at slightly different altitudes for a few selected study cases in different MEO orbits.
The tasks to be performed will include:

The results of the activity will aim at providing a demonstration by simulation of an expected on-the-fly relative position accuracy between a pair of MEO satellites of better than 5 cm and 0.5 mm in post-processing. If this technical performance is confirmed thanks to GNSS, this will enable a large number of potential application/scientific missions at reduced complexity and cost.