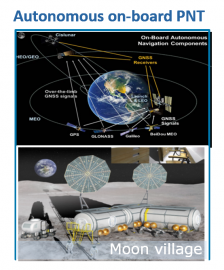 Current GEO and GTO missions already exploit GNSS signals for in-orbit PNT. NASA’s MMS mission has recently demonstrated that tracking of GPS signals is possible up to 150,000 km from Earth surface (half-way the distance to the Moon).

The feasibility of extending the use of GNSS for missions to the Moon has also preliminarily been assessed by ESA via GSP. These preliminary studies have concluded that navigation to the Moon using GNSS may be feasible, if specific high sensitivity techniques are implemented in GNSS spaceborne receivers. Multiple publications, in some cases complemented by tests with hardware in the loop, have demonstrated the potential for 100-200 metre accuracy of the orbit determination performance at Moon altitude using standalone GNSS.

GNSS spaceborne receivers could be used for different types of lunar missions:

Earth to Moon transfer orbit and Moon to Earth transfer orbit (MTO);
Moon orbit (in particular for Halo orbits such as the one proposed for the  Lunar Orbital Platform - Gateway mission);
Moon landing and lunar surface operations.
With the recent NASA announcement to return to the Moon by 2024, it is of strategic importance for Europe to develop the technology to support such a mission, with GNSS as a potential key enabling element.

The objectives of the proposed activity are: - develop and qualify a GNSS spaceborne receiver for lunar applications, including procurement of antenna and auxiliary components; - prepare an In-Orbit Demonstration (IOD) of the performance achieved by standalone GNSS for the different types of Lunar missions identified

The tasks to be performed will include: - develop a flight model of a GNSS spaceborne receiver to be integrated in the hosting Earth-Moon IOD flight opportunity; - develop a representative unit for ground testing and anomaly investigation

The results of the activity will: - enable GNSS receiver technology for orbit determination, velocity and time estimation of spacecraft orbiting to / from and around the Moon; - reduce operational costs of lunar missions, avoiding implementation of specific Earth-to-Space links.

Results from previous related ESA activities, such as “NAVISP-EL1-023: EarthMoon Navigation: System Study and development of a high-sensitive spaceborne receiver”, developing an early prototype of the receiver will be duly considered and assessed.