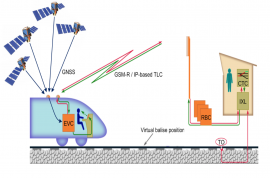 ERTMS is an EU initiative with the aim of improving safety and increasing interoperability of rail transport through a Europe-wide standard for train control and command systems, replacing existing national systems. ERTMS consists of two parts: the European Train Control System (ETCS), an automatic train protection system providing in-cab train control; and GSM-R, a radio system based on GSM for voice and data communications between the train and trackside.
ETCS uses odometry for positioning. The train position confidence interval, which includes the odometer error, is reset when a train passes over a physical balise. They are transponders mounted on the track that communicate with a train passing over it. GNSS is being considered for use in a virtual balise concept, in which it would be used to detect virtual balises. The aim of virtualising the balise transmission system is to reduce wayside infrastructure capital and operating expenditure associated with physical balises, removing the need for (almost) all balises in low-speed / low-density railways. The concept additionally provides increases in reliability due to a decrease in exposure to theft and vandalism.
A key issue for the use of GNSS in a safety critical train control system is the lack of confidence in the residual positioning error. Feared events from the system and local environment contribute to positioning errors that can lead to an increased risk of hazardous misleading information (i.e. position is not bounded by confidence interval). To date, track-area augmentation systems have been considered as a mechanism to provide barriers against system feared events in the railway environment. While SBAS potentially offers the possibility to leverage existing investments made for aviation, it is necessary to determine whether the system is suitable and determine the feasibility of current system allocations for the envisaged ERTMS applications.
The activity focuses on the current generation of SBAS (GPS L1 only), addressing the time frame of 2020.
The objective is to study the suitability of the current generation of SBAS for use in the evolution of the European Rail Traffic Management System (ERTMS) with virtual balise detection using GNSS, confirming the feasibility of current system allocations.
This activity is a necessary enabler on the system side for GNSS to be used in Safety of Life applications in the railway environment. It is expected that the activity will enable the development of innovative downstream applications such as virtual balise detection in ERTMS, leveraging existing investments in SBAS to further improve the value proposition of these applications.
This activity is also in line with the above mentioned E-GNSS in Rail Signalling Roadmap.
The tasks to be performed will include:

It is expected that the study outcome will support the railway industry in refining safety assumptions and allocations towards GNSS in the ERTMS virtual balise reader subsystem.
Provisions will be taken so that results can also be made available for follow-on R&D activities of EC/EUSPA. 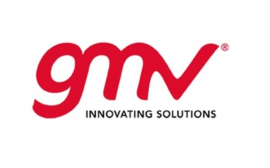